Posted on October 8, 2010 by katylucyjordan

In September 2010, I attended an event entitled “Web Science: A New Frontier”1, held at the Royal Society, in London. I signed up for the event because rarely does the opportunity to see such high-profile speakers arise for free. What I didn’t anticipate though was just how fascinating the subject of Web Science actually is, and I’ve come away from it with a fresh enthusiasm to learn more.

However, as the field of Web Science is relatively new, there aren’t many sources of information for people who would like to gain a basic introduction to the topic. This is what I hope to achieve through this blog; I’ve chosen to publish my studies online rather than conduct them in private, because I am sure that there are others like me who might find the information useful too.

Through my work as a researcher in Technology-Enhanced Learning, I’m also interested in the idea of Open Educational Resources (OER), and how you might use OER in learning contexts beyond the traditional model of Higher Education institutions. In other words, is it possible for an independent learner to educate themselves using freely-available online resources, to a similar standard of education as provided by a University?

The idea behind this blog is that I am going to try to educate myself about Web Science, using free, online resources where possible. I will write posts to share links to resources, and reflections on my progress, so it will hopefully not only help me to learn more, but might also be useful for others interested in gaining a beginners’ introduction to the basics of Web Science.

But what is Web Science?

One of the goals of this blog is to figure that out 🙂 But, if you’ve not come across it before, the idea of Web Science as a discipline was first presented by Tim Berners-Lee et al. in a paper in Science in August 20062, and launched as a joint venture between MIT and the University of Southampton in November 20063. Briefly, its goal is to bring together the various different fields and disciplinary perspectives involved in researching any facet of the web – be it social, political, or technical.

By this definition, the nature of Web Science is highly interdisciplinary, as this figure from Nigel Shadbolt4 shows: 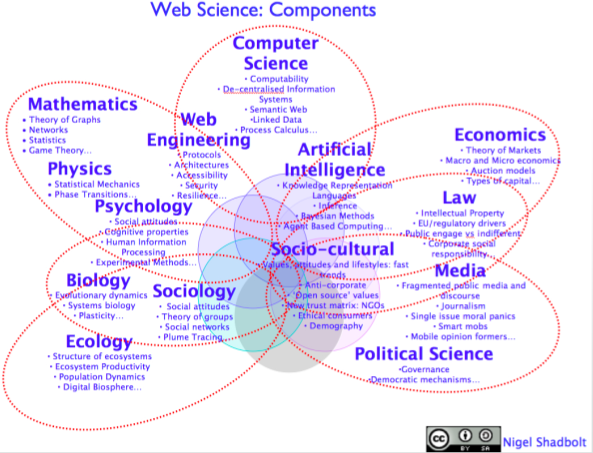 To me, this makes Web Science a very appealing, exciting field to study and potentially work in; but its interdisciplinary nature does provide an instant challenge to anyone interested in the field, who will likely be very familiar with just one aspect of this. I hope to get a better understanding of the basics in the multiple fields involved via these posts, but where to start?

Next post: What to study? Constructing a Web Science curriculum

Want to reuse the header? Click on the image above to access the highest resolution version. I created this image using Jmol and am publishing it here under a Creative Commons Attribution Non-Commercial licence.